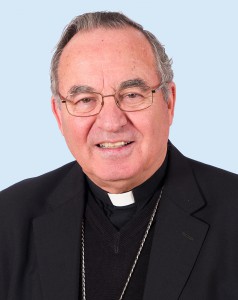 Excellent and Most Reverend Dr. Jaume Pujol Balcells, Metropolitan Archbishop of Tarragona and primate of the Spains.

The festival of the Virgen del Carmen is celebrated in the heart of many families who have some Carmen among its members, but also in many towns built by the sea. There are innumerable coastal towns that organize processions with the image of the Virgin, for its streets or riding in boats, to pay homage to the Mother of God in this Carmelite advocation, protector of the fishermen, patron saint of the navy.

I usually accompany the fishermen in this beautiful tribute to the Virgin «stella maris», «star of the sea» that leads us to Christ, thus leading us to the safe harbor of salvation.

“Nobody leaves without reason of his house, abandoning their families, lands and customs”

As every year we will repeat this processional tradition, which includes among its acts depositing in the sea a wreath of flowers in memory of deceased fishermen and sailors. This time, however, I would like this symbolic gesture, accompanied by our prayers, to be also referred to so many immigrants who lose their lives drowned when they leave their lands, driven to find a land of welcome and live in a better world.

An embarcation full of immigrants on the Mediterranean Sea.

Nobody leaves without reason of his house, abandoning their families, lands and customs. They are not adventurers, but people persecuted by war or extreme poverty who flee from the place where they were born and which has become inhospitable to them. At another time we might ignore this fact, but in a global world like ours, every day we are presented with the drama of these refugees who knock on our doors, even if they have to risk their lives by going out to sea under circumstances of very painful security.

We should not shrug our shoulders in the face of a catastrophe that has already claimed tens of thousands of lives in this close sea. On the feast of the Virgen del Carmen let us think how we can help resolve this situation, and that at least our prayers to the Virgin sailor are not lacking. We are all brothers, above identities, races and religions, and we can invoke this common Mother to help her children in situations of greater danger.